Dr Nick Waring, the new President of the Probus Club of Basingstoke, had an interesting first lunch of the new season at the Test Valley Golf Club. The Club had twin guests of honour, the Worshipful the Mayor of Basingstoke & Deane BC, Cllr Paul Frankum, and also his mother Cllr Jane Frankum who is the Lady Mayoress. On behalf of the Probus Club Dr Waring presented a cheque to the Mayor in aid of his charity appeal. The speaker was retired RAF Wing Commander, Bryan Jenkins, from Sherfield on Loddon, who gave an audio visual presentation about his experiences as an engineering officer in the Cold War at a RAF Vulcan station.

Bryan, himself a member of the Probus Club of Basingstoke and president of the Basingstoke branch of the RAFA, told about his years at RAF Waddington in Lincolnshire which along with nine other RAF stations in eastern England was home to the V bomber nuclear strike force in the early/mid 1960s. The Avro Vulcan, with its famous delta wing design was joined by the Handley Page Victor and the Vickers Valiant.

Probus members were alarmed to hear about the change of UK government defence policy in the swinging sixties. Pre 1960 they had the land based Blue Streak intercontinental ballistic missile. This was cancelled in February 1960 going instead for an air craft based system using the Blue Steel air to ground missile. The Blue Steel was easily fitted to the Vulcan. However this was cancelled after two months when the UK decided to buy the US built Skybolt missile. But this was cancelled by the US in December 1962 in preference to a submarine task force that would be able to fire the Polaris intercontinental ballistic missile. The UK had to follow suit and the Royal Navy took on the role of nuclear deterrence in June 1969 with nuclear powered submarines that could launch this sea to land missile. The V bomber nuclear defence programme was abandoned, the planes having a new role with tactical nuclear weapons and conventional ordnance.

However before this final change of direction there were interesting and occasionally alarming times at RAF Waddington. Of 27 Vulcans based at this station three were on constant standby fully fuelled and loaded with nuclear weapons ready to be in the air within the famous four minute warning. The Vulcan flight crew of five officers were not allowed off base during their period of duty. All three crews lived, ate and slept adjacent to their aircraft.

On one practice scramble the pilot could not unlock the door to enter the Vulcan. This was because the lock had frozen so he had to do what many motorists had to do in the winter back then, he warmed the lock and key with his cigarette lighter. It beggars belief what would have happened if he was a non-smoker and this was a real emergency.

And yet RAF Waddington was selected to be an airfield that could accept civilian aircraft that had developed in flight faults. This meant having to spread foam on the runway to help planes land when their undercarriage would not go down securely.  It could then take up to eight hours to have the runway clear and ready for the Vulcans to take off. Fortunately they never experienced a four minute warning during these episodes. 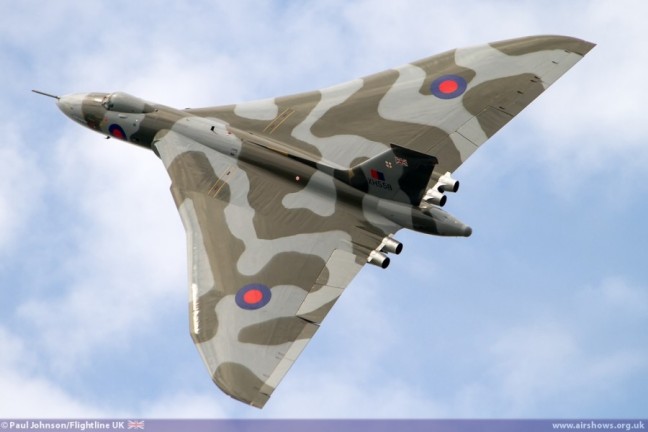 Even though they did not always carry nuclear bombs, the Vulcan could carry twenty one 1000 lbs iron bombs and it was necessary to undertake regular bombing practice. This was usually without ordnance and the Vulcan would be airborne for five hours at a time. To ensure the highest skills and keep up morale there were regular bombing competitions against the USAF. The famous attack on Stanley airfield in the Falklands was made by a Vulcan using conventional 1000 lb iron bombs and the plane was refuelled mid flight by converted V bombers, the Handley Page Victor.

All Vulcans had the capability to refuel in flight and they even went nonstop to Australia which meant in flight refuelling operations, some at night. There was a problem in that although the refuelling probe was illuminated by a spot light for the pilot of the Vulcan to guide it on to the trailing drogue, it really was not bright enough. Bryan had to find a solution, but had to use existing kit and was not permitted to go outside to obtain the ideal solution. No doubt the MoD was conscious that they must not over spend their budget.

The last Vulcan squadron was disbanded in March 1984 leaving only the display team to fly on for many years.