This was the title of the talk given to the Probus Club of Basingstoke by retired Major General Peter Chambers and his wife Valerie. They had previously given a talk to this club for retired business and professional men in October 2012 which was so well received that they were invited to be the last speakers in the current season. This couple rose to the occasion with great aplomb with stories about their experiences as Peter advanced up the ranks to become Deputy Chief of Staff UK Land Forces while Valerie had to cope with the pressures of domestic issues with various postings and housing problems.

Valerie and Peter described various incidents and aspects of life in some of the places they had lived and served. They spoke of amusing and light hearted experiences though occasionally with a serious undertone. They were able to give glimpses of the variety and advantages of service life whilst Peter expressed some concerns about current military capability.

They lived in Germany, on and off, for 12 years during the Cold War. Inevitably therefore, much of their talk was focussed on service life in Germany and in particular on Berlin. They quoted many examples of soldiers’ humour and of the resilience of Army wives, whose husbands spent long periods away from home on operations and training. Valerie described what life was like living in married quarters, a subject she knew something about as they had 26 moves in 33 years service!

They have recently returned from a visit to Moscow. This was essentially an international reunion of officers and civil servants who had attended a year’s course at the London based Royal College of Defence Studies in the 1990s when Peter was the Senior Army Member on the teaching staff. They were in Moscow for the May Day Parade and for the build up to the Victory Day Parade on 9th May and described some aspects of the atmosphere there during this period.

Returning for a second year to Oakley Hall the occasion lived up to expectations with excellent food, good wine and great company of members, wives and friends in splendid surroundings.

The guest of honour was the President of the Ladies’ Probus Club of Basingstoke, Jan Miller, accompanied by her husband Henry, who is one of our past presidents.

Thanks are due to Alan and Liliane May, who, with their expertise gained over the years in organising these evenst and our Christmas dinners ensured that things ran as smooth as silk. They were ably supported by Rob Hopkins who, after lunch, ran the raffle benefiting from the buying prowess of Richard Stettner who obtained a good deal on the prizes.

Thanks also go to Gerry Anslow, the photographer on the day and who is happy to provide any member with the file of any particular shot or can print out a high quality image suitable for framing. 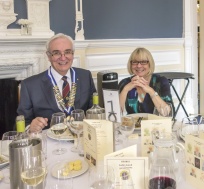 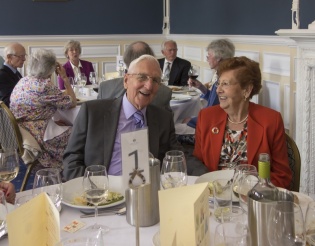 An inspirational illustrated talk by a mountaineer who is raising money for two local charities, St Michael’s Hospice and Marwell Widlife was given to the Probus Club by local man Stephen Court.

Although only twenty seven years old and a serving police officer based in Basingstoke he has been on a mission for several years with £40,000 as his target. He has so far raised over £7,000.

In January this year he went to the south of Argentina to tackle Mount Aconcagua, which at 6,961 metres or 22,837 feet is the world’s second highest mountain. Even in the height of the southern hemisphere’s summer the temperature on the mountain ranged from 30 degrees during the day to minus 10 degrees at night.

This expedition was the culmination of several years’ training by ascending Kilimanjaro in Tanzania, Toubkal in the Atlas Mountains of Morocco; from the peak it was possible to see the Sahara desert to the south and the Mediterranean Sea to the north, and Machu Picchu in Peru. Last October his attempt to ascend Mera Peak in Nepal had to be abandoned due to illness, so it was easy to understand that his efforts have a distinct element of danger.

Altitude sickness can be a common problem along with heart attacks and falls on high mountains and an average of three people die each year on Mount Aconcagua. Despite these dangers the mountain attracts considerable numbers of climbers during the summer season and the rangers, who strictly control matters, have organised permanent camps at different altitudes.

Approximately only 40% of the climbers reach the summit. The rest are thwarted by accidents, illness and weather problems. In fact just as he was about to attempt the final ascent the rangers closed the mountain due to approaching bad weather from the Pacific Ocean. Disappointed, Stephen started the descent when he badly damaged his knee. As a consequence he had to be airlifted off the mountain by helicopter operating close to their maximum height due to the thin air.