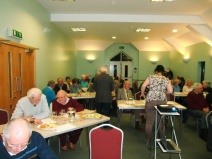 “Different Worlds” was the subject of a wine tasting evening enjoyed by a full house of members, their wives /partners, family and friends held at Christ Church in Chineham.

Helen Malcolm, the Customer Tastings Manager of Laithwaite’s Wines, was the guest presenter. Full of enthusiasm for her subject she has worked for Laithwaite’s for four years since graduating in Hospitality Management from Portsmouth University. Part of her course involved taking the intermediate certificate of the Wine & Educational Trust and her employer has since put her through the advanced course.

She set about educating her audience, who probably had ample experience of wine drinking over the years, that the same grape demonstrates different characteristics when made into wine in either the old or new world. The old world rules and regulations held dear in France are not followed in the new world of Australia and New Zealand. The new world uses large stainless steel vats instead of the expensive small wooden barrels which the French producers consider gives an additional flavour. Not to be outdone the new world wineries today are adding oak chips into the stainless steel vats to see if they can match their European counterparts.

It was the new world that set the precedence for having descriptive labels on the reverse of bottles to aid the purchaser when making their selection. Interestingly this is now being followed in some, but not all instances, in the old world where they have recognised the necessity to help customers make the right choice.

But, of course, it was the actual tasting of the wines during the evening which demonstrated the differences that the presenter had been keen to impart. A Sancerre 2012 from France was compared to a Sauvignon Blanc 2013 from New Zealand. Made from the same grape the French wine did not identify the name to the uninitiated whereas the New Zealand wine made no apology for saying clearly that it was made from the Sauvignon grape. The red Australian Shiraz 2011 (the grape is known as Syrah in France) was then compared to the top Chateauneuf-du-Pape which retails at over twice the price of the Shiraz.

The presenter had previously advised what range of nibbles should accompany each wine to enhance the flavours, which had been made by wives and family of members. It all contributed to a very enjoyable experience. 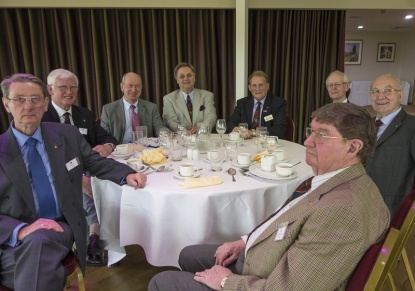 The lunch on Tuesday 11 March 2014 was the final such event for David Carwardine who later this month is moving with Betty to a retirement complex in Wiltshire to be nearer his family. Like all matters concerning property, everything always takes longer than anticipated and David told his audience that he actually placed his deposit for his new apartment in November 2012. He had a buyer for his house shortly thereafter who moved into rented accommodation to await David and Betty’s departure. What it is to have such a desirable property to sell!

David spoke warmly of his 23 years as a member of the Probus Club of Basingstoke, reminiscing about some of the social occasions he and Betty enjoyed. One such was to Bruges where his seventieth birthday was celebrated in a local eatery with the other Probus members on this trip. His joint venture of an investment club along with John Dunn, who is now resident in USA , Mike Jarvis and others actually made some profits but what happened to them was not disclosed.

What David was very sure about was that it was the variety of members’ backgrounds and experiences that made Probus such a pleasant organisation to belong to and he thanked everyone for their friendship over the years.

Mike Jarvis gave a response which incorporated the following aspects of David’s time in Probus.

During his presidential year he started the practice of quarterly committee meetings prior to the monthly lunches which still endures.

He celebrated his 70th birthday on the outing to Bruges. The meal was memorable, but not the best we’ve had. We still enjoyed the occasion.

With John Dunn and six others we started The Peripatetic Investment Club in 2001. Our monthly meetings were fun and we even made a small profit.

He is moving to Wiltshire, into a retirement village. I well remember that he was responsible for the investment club buying shares in one of the developers of such villages. We made money.

David has been a loyal supporter of Probus throughout his membership. He has never been afraid to let committee members know if something can be improved. His gentle suggestions were always worth listening to. Many in this room will have had their ears bent.

In my experience David is unique. He is already an honorary life member, yet he still has been coming to meetings. Fortunately the committee was sharp enough to get his fee before changing his status.

I am certain you will all join me in wishing David and Betty every happiness in their new home and to say that if he ever wants to visit and attend a meeting he will be most welcome. 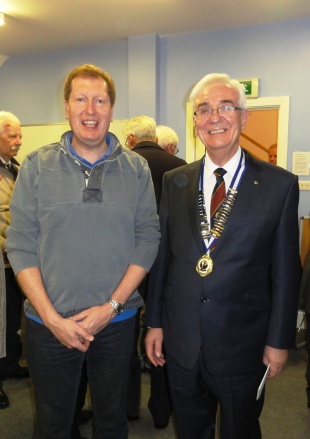 This was one of the fascinating facts Probus Club members heard from their guest speaker Andrew Goddard, the Commercial Director of TNT Post, who lives in Hatch Warren, when he gave an overview of the history of the postal service in UK. Started as the Royal Mail by King Charles 1 the recipient of the letter had to pay for its delivery and this was changed by Roland Hill in 1840 by the introduction of the prepaid adhesive stamp, the famous Penny Black. In London there were up to four deliveries a day to households and businesses and it was possible within close proximity to have exchanges of several letters on the same day.

The importance of mail reaching its addressee was recognised as a moral boosting element within the British Army and in 1868 the Post Office Rifles was formed to handle the mail to the troops wherever they were in the world. The BFPO today is a much reduced operation as machinery has had such an impact on mail handling that the service has a staff of only 30 service personnel being based at RAF Northolt.

Because of traffic problems in London and the need to get mail to the various sorting offices it was decided to build the Post Office underground railway which was opened in 1927. It ran for over six miles from Whitechapel to Paddington with seven stations between. Closed in 2003, there is very recent news that this long disused line will be reopened to the tourist market.

Since the advent of the telegraph the General Post Office had seen their telephone business expand exponentially and in 1981 was separated into Royal Mail and BT with the telecoms business eventually being privatised. The government retained control of the postal business and has only very recently sold this off with a public share offering being heavily oversubscribed. Those members of the public lucky enough to be allocated shares have seen their value almost double since its flotation.

When the postal market was opened up to full competition in 2006 there were several entries and these days TNT Post is the largest competitor to Royal Mail and yet is also their largest customer. This apparent paradox is due to the fact that the Royal Mail still carries out the final mile to the delivery address. However even this is undergoing change as TNT Post now has its own delivery personnel in two centres in England and wants to grow this aspect of their service offering their business customers proof of delivery of all mail.

Even after the impact of email has been counted today there are still over 13.8 billion letters posted each year in UK. A lot of these are what is known as transactional mail, those utility and credit card bills, direct mail and of course the Christmas card market where UK is the largest sender of these personal greetings.