Geoff Twine (as the current holder of the Shield) organised this event and 7 members attended. Geoff Twine, Bryan Nagle, Alan May, Richard Stettner, Jeff Grover, David Wickens and John Swain all battled it out for the 2019 honours in this Stableford Competition. This means that points are awarded on completion of each hole depending on how many shots it took and what handicap you are playing off. The person with the most points is declared the winner.

The day was just right for a game of golf after the preceding days had been quite rainy. We all posed for our photos at the first tee before setting off at 10 am. In the first group was Bryan Nagle and Alan May in a buggy together with Richard Stettner.

The other four all played together and Geoff Twine is seen putting on the 18th green.

As usual it was a day of some good shots and some bad and after all the scores were in and checked it was surprising that very few points separated all 7 players but the winner by 1 point was Richard Stettner who was presented with the Shield by Geoff Twine.

Everyone enjoyed an excellent golfer’s meal of ham, egg and chips together with a small libation and plenty of chat about what had gone on throughout the day.

Let’s hope that Richard can organise another super day out next year.

Tuesday 13 August was the date for the annual Probus Summer Pub lunch and this year Barton’s Mill in Old Basing was the chosen venue. Thirty six arrived simultaneously at the appointed hour of 12 noon that at first glance appeared to cause difficulties for the bar and kitchen staff as there was some rumour that it could be anything between 45 minutes and one hour to get our food.

Reality proved better than the forecast and although there was a crush at the bar placing orders the food arrived in the sort of time usually seen in such establishments.

The weather turned out pleasant and sixteen sat outside and twenty in the heavily beamed room slightly in the dark but it is possibly very welcoming in the winter when the fire is lit.

What a day to remember! It had been over a year since booking our place but a party of 29 consisting of members and their wives/partners of the Probus Club had a wonderful experience as they were present at the Commandant’s Parade at the world famous Royal Military Academy in Sandhurst. 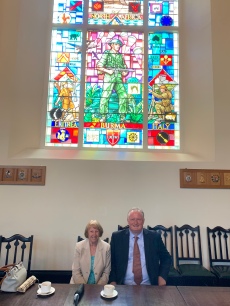 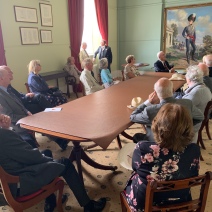 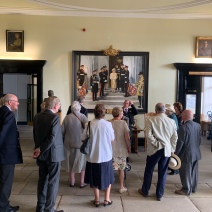 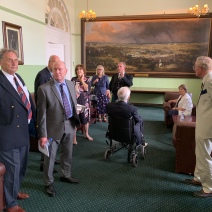 The whole day was one to remember of history, pageantry and military precision. The proceedings took place in and around the Old College building and on the parade ground outside. Starting with coffee in the Indian Room, with wonderful stained glass windows depicting British military history, the party, along with around 2,000 other guests, went outside where two large stands had been constructed completely under canvas. Between them was the dias for the salute to be taken by the Commandant as he reviewed the parade of the Officer Cadets, some third of whom were at the end of 12 months training before commissioning as an officer in today’s army. 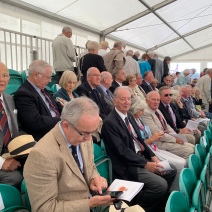 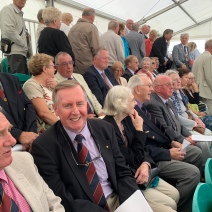 While the majority were British, there were several foreign nations on parade as Sandhurst is recognised as one of the world’s premier officer training institutions. One American cadet had previously stated that while West Point in Virginia is a university Sandhurst is the place to go to learn to be a military officer. There are typically over 90 Overseas Officer Cadets from up to 40 different nations at Sandhurst at any time. Since 1947, over 4,800 young people from 120 different countries have trained alongside British Officer Cadets, reinforcing the ties between the British Army and the Armies of our friends and allies.

At this Parade, of four top awards two were for Overseas Officer Cadets – the International Sword was presented to a Cadet from Ukraine and the International award went to a Cadet from USA. The recipients are clearly heading for high office.  We were told that there are today twelve world leaders, either political or royal heads of state who had attended the Royal Military Academy, Sandhurst.

The breakdown of those at the academy has 12% female, 80% graduates and 70% public school where the tradition of the army cadet force generates interest in following a military career. Many of the tutors are NCOs who bring real army experience and were visible on parade in charge of the various sections as they marched past the saluting dias of the Reviewing Officer. The band of the Parachute Regiment provided a varied programme of music throughout the Parade. 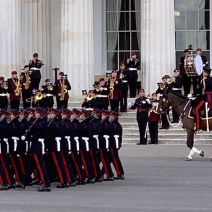 The audience had to stand on several occasions as certain parts of the Parade dictated which gave a feeling of being involved in the proceedings. Gentlemen had to remove their hats and any in uniform had to salute. The Commandant and his party inspected the Parade and the Sovereign’s Platoon presented Arms following which they trooped the Sovereign’s Banner. The Parade marched past in slow and quick time and then in review order. The Commandant addressed the Parade and then presented the awards. 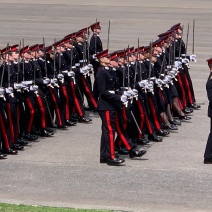 At the end of the Parade and when all the Cadets had marched off the Commandant and his party walked across the parade ground and after thanking the band went up the steps and through the portico entrance into the Old College. The Adjutant who had been on horseback throughout the proceedings most impressively rode his horse across the parade ground and up the steps and through the large doorway of the Old College a tradition started in the nineteenth century. 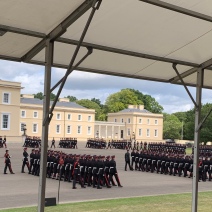 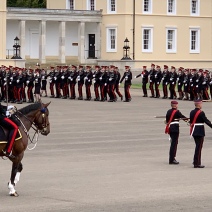 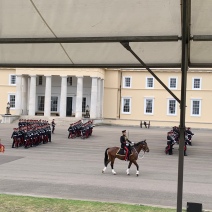 Afterwards the Probus party had lunch in one of the many restaurants used by the troops before being taken on a guided tour of the various rooms in the Old College and later outside to visit the Church of England chapel in the grounds. This contained many wall plaque memorials to fallen officers in WW1. Modern casualties were commemorated with carved wooden displays. 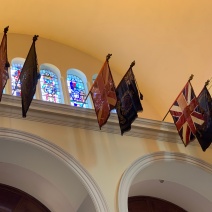 This had been a full day revealing many aspects of the history and tradition that lies behind the training of an officer in today’s army. The discipline and skill shown on the parade ground will leave an abiding memory.