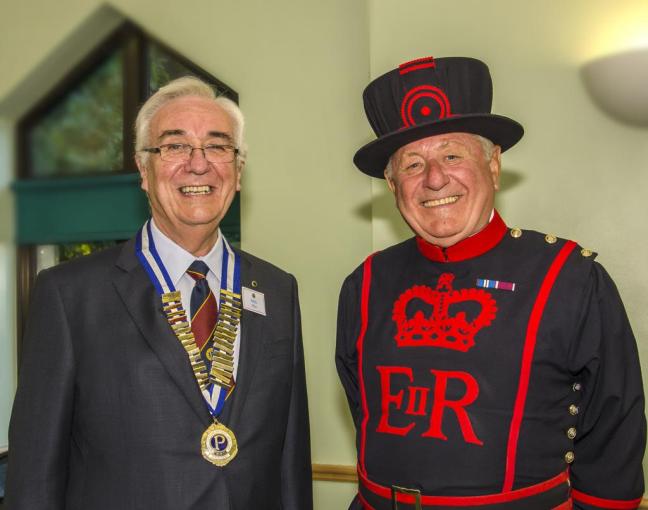 These were some of the subjects talked about by the first guest speaker of the 35th season of the Probus Club of Basingstoke the social club for retired professional and business men. Tony Strafford is a retired Yeoman Warder from the Tower of London and he cut a striking figure resplendent in the “undress uniform” of dark blue with red braid complete with hat, as traditionally seen at the famous castle by the Thames.

An accomplished raconteur, he told fascinating tales about how bishops in the early days held considerable power, prestige and influence on the kings and queens of the day. One king, Charles 11 had twelve or seventeen children, dependent on which record is believed, but none with his wife. When the ravens of the Tower had to have their numbers reduced it was of great concern to ensure that the old prophecy did not come true about the demise of the English throne if they all left the Tower. So six were kept and had their wings clipped. In the wild ravens live for less than ten years but in the Tower they can reach forty.

Although the general impression is that there were many executions at the Tower of London the reality is much different. There were more executions there in the twentieth century than in the preceding seven hundred years. However there were public executions in London, usually beheadings, rather than hangings, for famous people. The public flocked to see them and sometimes the crowds were so large that stands were built to ensure many had a good view of the proceedings. And of course the payment of a bag of gold coins to the axe man by the prisoner ensured that it was a clean chop. Their heads were then placed on a spike on London Bridge.

Many phrases in common parlance can be traced to past times and to hear how they came about was an education in English history and language. When a prisoner was taken by cart from the city of London to Tyburn (now Marble Arch) in Westminster for execution he was given a drink of brandy – One for the road. At the meeting on the boundary of the cities there was a handover of the prisoner at a hostelry where those in charge had a drink of brandy. The prisoner was not permitted to join them – He was on the wagon.

When the Bethlehem hospital in east London then became known as Bedlam for the feeble minded the public were admitted to look at the inmates who would be encouraged to laugh by prodding them with a stick – Poking fun at them. The hospital was out of sight being built around a corner so people transported there were – Sent round the bend.