The Covid-19 lockdown not only put paid to our main, monthly lunch meetings, but also to the local magazines on which we rely on for the majority of our publicity activity. Bearing in mind that the copy closing date for most of these publications is around the 15th of the previous month is the reason that most of them actually appeared with their April editions. However the Link (Oakley and surrounding villages) made an early decision to stop all activity which meant that they were the only one not to publish for April.
Below can be seen our successes in these April magazines. Those of you with a keen eye will see that the Basinga (Old Basing and Lychpit) gave us two hits – one in the printed magazine and the other within their Extra, the name for their web section containing all the reports they could not find space for in their printed version. The reason being was that their editor failed to include one of our reports in their February publication.
Our last meeting was in March, well before the lockdown was announced, which meant that the main subject matter for our reports was about the talk we had from Mel Rees which was most entertaining. 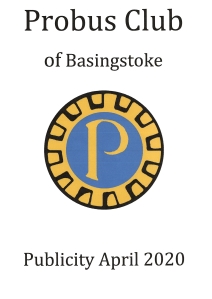