The 39th Annual General Meeting of the Probus Club of Basingstoke had a two part ceremony for the elevation of Chris Perkins MVO to become the President for the coming year. The actual handing over of the Chain of Office took place at the lunch on 12th June as Chris was on holiday on 28th June which was the date of the AGM.
Meanwhile back at the AGM, held at Christ Church in Chineham, after the various reports were presented there came the voting for the Officers and Executive Committee members for the ensuing year. Paul Flint remains as Hon. Secretary (as well as PR Officer) now with assistant Secretary Peter Hayes and Alan May as Hon. Treasurer with assistant Treasurer Dr Jeff Grover. Richard Wood becomes Vice President with the additional, new, role of Welfare Officer. Alex Marianos takes over as Lunch Steward from Stephen Thair who leaves the Committee after four years in that position and Tony Atchison continues as Outings Organiser while David Wickens becomes Programme Secretary now Chris Perkins has taken on the top position. 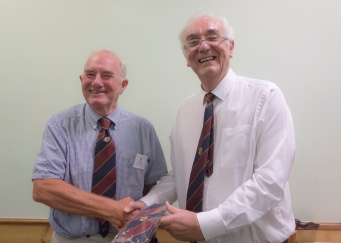 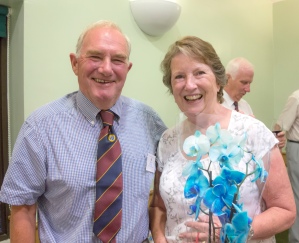 Dr Nick Waring received the Past President’s tie from Paul Flint. Dr Waring thanked Lesley Atchison for once again producing the nibbles after the meeting and presented her with some orchids.