Roger Shaw, a member of Henley Probus, gave a talk to the Probus Club of Basingstoke, about the history of the Oregon Trail. He had lived in America for seven years and together with his wife had driven the entire 3,000 miles route in 2013 and 2015.

The American government encouraged immigrants to resettle westwards as the east coast had been swamped by the influx of people from Europe. The attraction was of plentiful and cheap land, originally 600 acres free for a married couple (approximately a square mile) and 320 acres for a single man.. The only stipulation was that they had to improve it. Eventually it was sold for $1 per acre. With the 1849 Gold Rush adding more pioneers, between 1840 and 1860 half a million people, mainly farmers, including 70,000 Mormons and many Irish, made the six months journey from Independence Missouri to the Pacific North West coast. The Mormons diverted south to Utah to establish their own community having promised the government that they would give up polygamy.

The migrants travelled in huge groups in wagon trains, with the preferred smaller lighter covered wagons christened “Prairie Schooners” pulled by oxen. These wagons, some made by Henry Studebaker, a name subsequently made famous in later years by the manufacture of cars, were capable of floating. Each family had to take their own food and water as there were no trading posts along the route in the early years. They traversed the Great Plains, then across the Rockies to the west coast. They favoured a particular route across the mountains called the South Pass, in Wyoming, which was a gradual ascent up 8000 feet where a trail had been worn over many years by millions of buffalo.

Most people will have seen in films or on TV stories about the Wild West and wagon trains that formed circles at night for protection against attacks by American Indians. The reality was somewhat different and while they did form circles it was so the oxen could safely graze within the confines. Initially the Indians were helpful to the immigrants supplying them with buffalo meat but relations soured as time went by. The real problems started in 1847 when half the nomadic Cayuse Indian tribe and all their children were wiped out by a measles epidemic introduced by the Europeans. Their retaliation often took place on later wagon trains but ended after a seven year war with the government during which 400 settlers were killed.

The logistics of wagon trains are incredible with one consisting of 1,600 wagons, 10,000 oxen, 30,000 cattle and 60,000 sheep and was 300 miles long. All but young children walked the distance, many barefoot, averaging 15 miles a day. Death en route was common, including drowning crossing rivers, while diphtheria, measles and accidents took their toll on children and up to ten percent of the travellers died from cholera with records showing that on one trip 57 died on one day alone.

The famous Pony Express was created to act as a postal service and was capable of bringing mail from the Mid West to the Pacific coast in ten days. However failing to obtain a government mail contract and technology, in the form of the telegraph, meant the Pony Express only lasted eighteen months.

The Oregon Trail came to an end when, in 1869, the Union Pacific railroad provided an easier way to complete the journey. 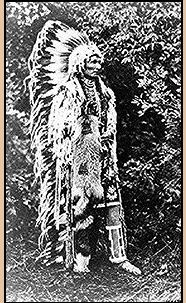