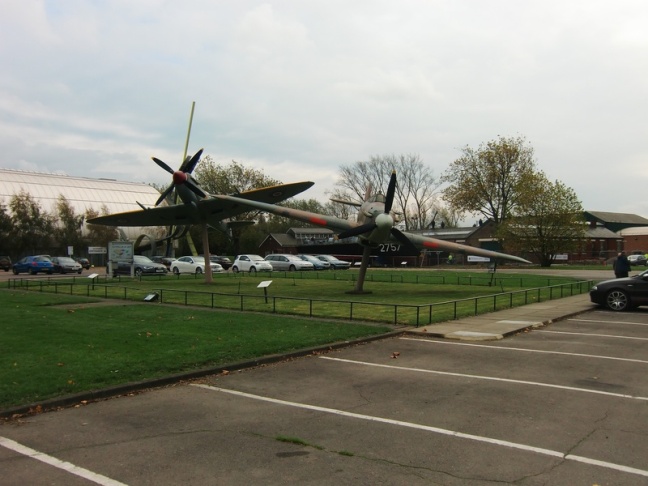 A party of 31 consisting of Probus Club members, their wives/partners and friends went by coach on Thursday 6th November to the RAF Museum at Hendon. For those of the non-military type it was extremely impressive but for those members who had served in the RAF it was a poignant trip down memory lane.

The visit started with a welcome cup of coffee or tea and a Danish pastry in the Echo Alpha Tango (EAT) restaurant which was also the venue for a late lunch. The first sight outside the main entrance to the museum was the Supermarine Spitfire and Hawker Hurricane and then perhaps surprisingly was to see two RAF rescue high speed launches which had been used to pick up downed pilots out of the drink.

There were several connected halls so that once inside it would be several hours before everything had been seen. And what a vast array of aeroplanes were on display. From the earliest glider to the the latest stealth fighter. From a German V2 rocket to the impressive AV Roe Vulcan. From ejector seats to the magnificent Short Brothers Sunderland Flying Boat. From The famous AV Roe Lancaster bomber and its American sister  Boeing B17 the Flying Fortress. From all kinds of helicopters and autogyros to wartime displays about the blitz. Barnes Wallis and his bouncing bomb used by the Dam Busters and a Dornier dug out of the Goodwin sands. Various plane engines and military vehicles from pre- war Hillman Minx and post war Standard Vanguard staff cars to Ferret scout cars. Everything was magnificently displayed but in parts dimly lit to reduce the corrosion process.

Although a museum of specific interest to the male species the ladies also thoroughly enjoyed the visit. One of the RAF veterans thought it quite awful to see so many machines he had flown in were now in a museum.