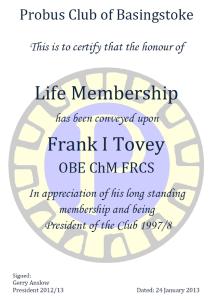 The Probus Club of Basingstoke has conferred a Life Membership on Dr Frank I Tovey OBE, ChM, FRCS as he and his wife Winnie will be leaving their Crossborough Hill home early in February for pastures new in Lymington.

Dr Tovey has been a member of the Probus Club in Basingstoke for many years and was President in 1997/98.

Although the announcement was made at the last evening meeting the presentation of a framed certificate was made at their home by Probus Club President Gerry Anslow. A reporter and photographer from the Basingstoke Gazette were there to capture the event and it is hoped that a feature will appear in the edition to be published on Thursday 7 February, the day before Frank and Winnie leave our town.

Frank Tovey is well known in Basingstoke as for 20 years he was a Consultant Surgeon at the North Hants Hospital, retiring in 1986. Previously he was 16 years at the Holdsworth Memorial Hospital in Mysore, South India and prior to that for over a year at the Methodist Hospital in Zhaotong, Yunnan, south west China. He was appointed OBE in 1966 for services to surgery and leprosy in India.

Other appointments include Honorary Research Fellow in the Department of Surgery, University College Hospital, London and Honorary Senior Research Associate, Department of Surgery and Interventional Science at University College, London. For eleven years he has been a member of the Editorial Board of the World Journal of Gastroenterology where he reviewed submissions of medical papers and published many articles of his own.

We all wish Frank and Winnie well in their new home.