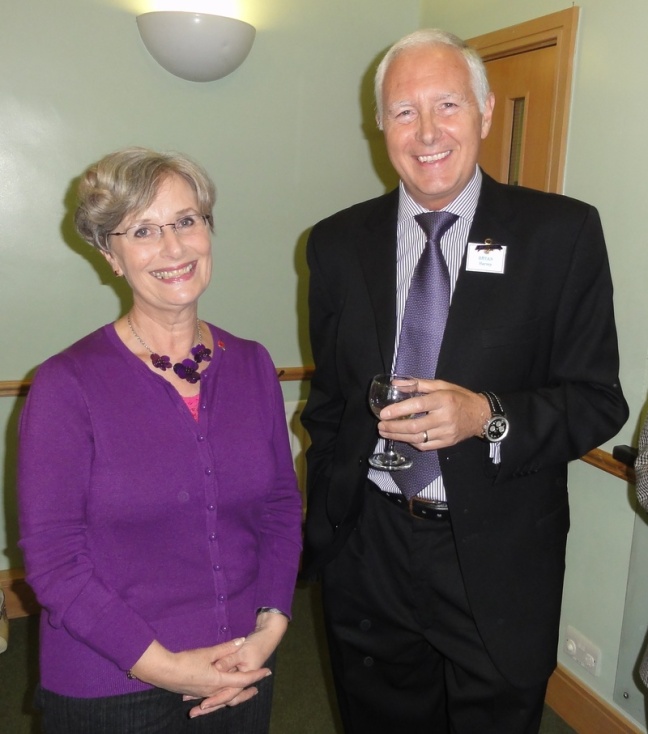 In the picture above, Mrs Valerie Chambers, one of the speakers about army married life, with Probus secretary Bryan Harvey.

Follow the Drum was the title of a talk by Major General Peter and Mrs Valerie Chambers on the occasion of the evening meeting of the Probus Club of Basingstoke held at the end of October.

They told of their experiences as a married couple while Peter served in the army for 33 years and the need to move home 26 times in that time, mostly in married quarters. At one period they moved five times in two years. Since retiring from the Regular Army in 2002, they have lived in Kempshott and say that they are determined to stay put.

Quite the opposite of a chronological history of their moves, the audience of retired professional and business managers enjoyed hearing of the mishaps, some poor conditions of quarters and service humour the couple encountered as they progressed up the promotional ladder, where Peter became Deputy Chief of Staff HQ Land Command.

The Probus Club of Basingstoke meets twice most months; lunch at Sandford Springs golf club near Kingsclere on the second Tuesday and an evening meeting on the fourth Thursday at Christ Church, Reading Road, Chineham, when they have a guest speaker. There is an extensive social programme that includes wives/partners with visits to places of interest, a Ladies’ lunch, summer pub lunch and Christmas dinner. Potential members should contact the Secretary Bryan Harvey by email bryanharvey@talktalk.net or phone (01256) 321473 for an informal discussion.